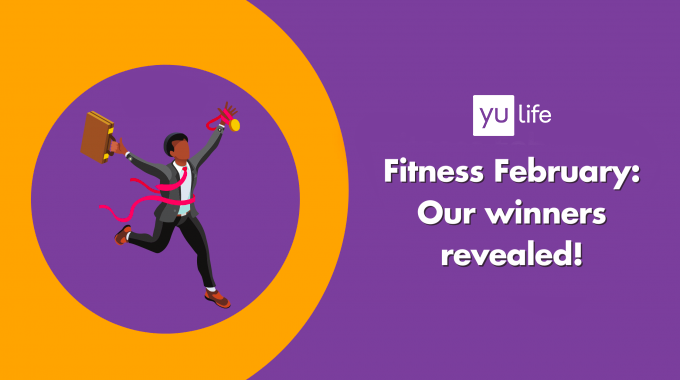 We have finally reached an end to our Fitness February step-count competition in the Hooray Health & Protection and Engage Health Group Ltd office. The results are in, the winners have claimed their prizes, and the losers… well let’s just say the losers are feeling cheated!

This is our final instalment recording the progress of this challenge, and we can safely say that it is definitely something we would like to try again. Perhaps something other than steps, as Dave Chidley suggests (Engage International), we are all a bit walked out at this point…

“I tried right up until the end… walking around in the pouring rain last night was the final straw and I had to admit defeat! I am happy to do this sort of thing again – as the competition is great. I am not so keen on walking anymore – so any challenges that involve a mobility scooter would be appreciated! Thanks for organising and keeping February active!”

So, let’s get into the final details! It’s time to reveal who the winners are (as well as the ones who didn’t really give it their all!), showing what we have learnt, and our responses to introducing competitions into the office.

The big reveal: Our top 3 walkers

We’ve tallied up the results and I can confidently say I’m shocked at who our winner is! Engage Health Group’s Director, Nick Hale has snatched that first place top spot, winning Fitness February. 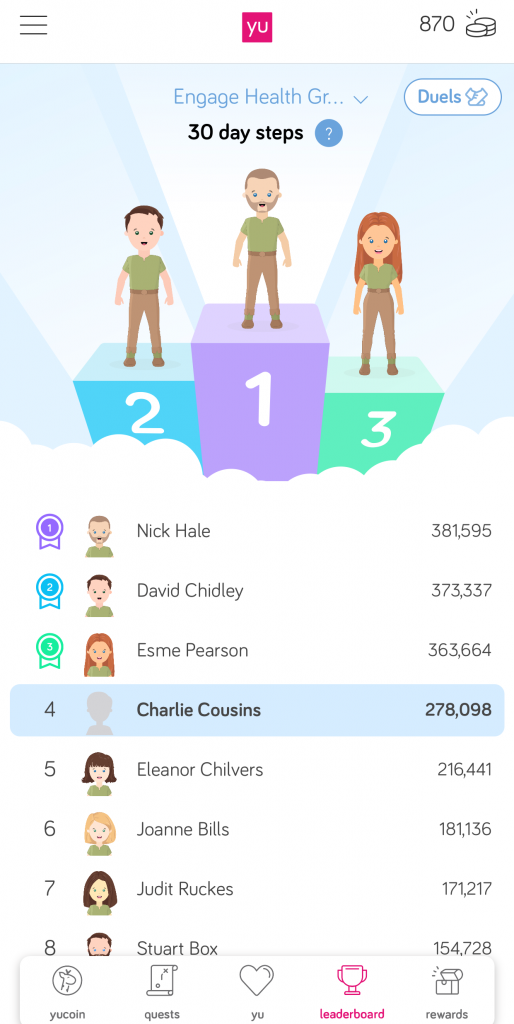 Nick comes out on top with an average of 381,595 steps – how is this possible?! He is closely followed by Dave with 373,337 steps, and Esme at 363,664 average step-count. As shown from the leader board above, the competition was a close one – that top spot really could have been anyone’s!

I’m not going to lie, I’m disappointed in the fact I didn’t come out on top (or at least beat Nick), and even more surprised that I got bumped from the top 3 winners! However, the story I’m going with is foul play, perhaps even cheating… how else could Nick suddenly be sitting comfortably in the best position?

However, I will admit that I did have the odd day (sometimes self-inflicted, sometimes genuinely feeling unwell) where I would only do as many steps as moving from my bed to the sofa. This definitely set me back! The guys in the top 3 were relentless with their steps.

To win, Nick had his phone strapped to himself whilst playing football or on the Peloton, ensuring his steps would soar up in average. Dave quite literally walked everywhere! On the way home from work, walking for the full hour of his lunch break, taking his kid out at the weekend on walks and in the evening. Then the third-place runner up, Esme also fully committed to the YuLife challenge. Going to the gym regularly either before or after work, walks to and from the office, and quite often racks up around 20,000 steps on her days off!

How well was the competition received?

I was pleasantly surprised by how well we all received this office challenge – everyone (including myself!) really went all out and tried their best. Each with our own motivations, whether that was to improve office friendships or just wanting to win those prizes, at least we all went for it. Even just everyone being involved can make a huge difference in how these competitions work, making this a fun experience for all of us in the office.

One of our predictions from the beginning of February that we did live up to was the crazy work ethic and effort that everyone put into this challenge (particularly those who came out in the top 3). Everyone in the office made changes to their everyday health and wellbeing efforts, whether that was a big change such as setting a goal of 20,000 steps every day or on a smaller scale like going for a 10-minute stroll at lunch. Either way, getting everyone to participate in this challenge allowed our teams to reassess their walking habits and inspired all of us to get out and about.

Although the step-count challenge did reveal how most of us in the office are competitive in nature, when it comes down to it, supporting and celebrating one another is something we hold very important. Nick actually gave up his claim to the top-spot prizes! Instead, he is splitting them between both Esme and Dave, sharing out the winnings – now that’s what we’re all about here in the Hooray/Engage office!

I mean, what type of bosses would we be if we didn’t let our employees take home the prizes, eh?

As outlined in the other instalments of our Fitness February challenge, we tracked our average step-counts and improvements through the YuLife app, collecting YuCoin as we went to convert into vouchers and other little prizes.

But how did our teams in the office get on with using the app? Which features were best received by everyone? Was it easy to use?

As a group, we can collectively say that the YuLife app was easy to use, not having to log in every day for it to track your steps. Whenever you did open the app, it would update and catch up on all the steps you had taken over the last few days – ensuring fair competition.

Although we were already taking part in our own step-count competition, the app also allows you to participate in meditation and walking quests. This was a great way to earn extra YuCoin and keep everyone from slacking in those mid-month weeks!

Another function of the app that we all really enjoyed was creating our avatars (as seen on the leader board). Personally, I didn’t actually make an avatar for myself – I had to be taken seriously! But we did have a few characters that came out of the competition, check out these guys below. 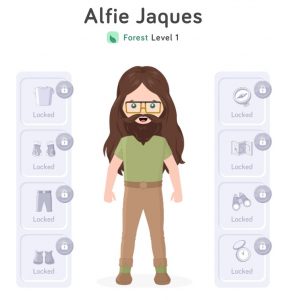 Some went for lifelike reflections of themselves, whilst others have gone for extravagant expressions. I’m not even going to get started on Alfie’s avatar and what that means for how his mind works.

I have already been able to build up enough YuCoin to cash in my own prize (I didn’t even really need to beat Nick!) – an Amazon voucher. EAPs become immediately a more personalised rewards system for staff, meaning they choose how they are rewarded and whichever perks they want. For example, Jo Bills from the Engage International team has been using the YuLife app to plant trees across the UK – each to their own!

Taking part in a Fitness February competition has really been a blast and definitely worth giving a go! Now that we’ve taken that step (pun intended) in team building activities, these types of competitions and challenges are becoming more and more appealing to our office. I hate to have to say it, but Fitness February has definitely improved our team building, involvement and proactivity here!

We would love to do more activities like this going forward in the rest of 2022, and we are open to any suggestions. A few ideas that have been bouncing around the office already have been more fitness challenges, competitions for charities/raising donations especially with the current state of the world, treasure hunts, real-life bingo, escape rooms – the possibilities are endless!

Thanks for joining us on our Fitness February YuLife challenge, we hope we have inspired some others to join in on these office team-building challenges.

We help start-ups and SMEs negotiate the often-confusing employee benefits and health insurance market. Contact us today and we’ll be happy to answer any queries. Call 01273 222805 or click on the bottom right chatbox.